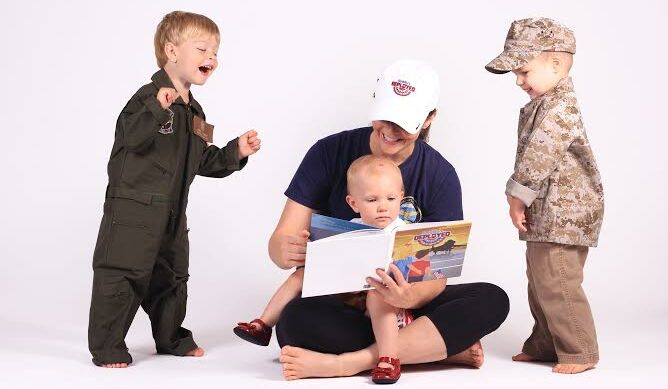 Congratulations to our latest WomensNet.net Amber Grant Winner, Bridget Platt from North Carolina. Bridget is the Founder of Daddy’s/Mommy’s Deployed (Daddy’s Deployed, LLC). Her company creates completely personalized children’s books for our countries littlest warriors with a parent deploying. We hope you take a few minutes to read our interview with her below.

WN: Congratulations on winning the December Amber Grant!
BP: I wish y’all could see the smile on my face right now. I feel so honored — thank you so much!

WN: What inspired you to create Daddy’s Deployed?
BP: It was always in the back of my mind…but I didn’t know what “it” was, exactly. I worked at a child development center on base several years ago, and I saw first-hand how young children could be affected by deployments. The father of one of our sweetest two-year-old girls deployed and immediately she changed: she didn’t want to eat, she started having accidents, and would cry out for him at nap time. I wanted to create something that would help young children understand what was happening in their lives. When my daughter was six-months-old her father had already left on three different military ventures, including a seven-month deployment. I wanted her to know who her daddy was, to “see” him on something she could touch. I knew I was on to something when we were shopping on base and she saw men in the same uniform her daddy wears (and that is shown in her book): she started kicking her legs and squealing excitedly in the baby carrier, even though she was only thirteen months old.

WN: Do you have a story about a particular family that you’ve helped?
BP: We recently received an email from a father, an Air Force pilot, who found out he was deploying 10 days before he was set to leave. He ordered a book for his young daughter and emailed us to see how long it would take to arrive. After reading his email, I contacted my illustrator in tears, and she created his personalized book immediately. We expedited the entire process and had the book in his hands in record time. He reached out to tell us that he was giving the book to his daughter the following night, her birthday, at story time before bed. It was their last night together and that’s how he wanted to spend it: introducing our book to his daughter. I am so proud of the fact that we were able to help that family. Having gone through two deployments with my husband, I know how stressful it can be when you have months to prepare…I can’t fathom ten days.

WN: What’s new since the application?
BP: We are thrilled to announce that we are developing corporate partnership options this month. We want to get our books into the hands of as many military families as possible, at little or no cost to them. We will be using this amazing grant to ensure that our partnership package is professional and effectively done. We will also be sending out copies of books to child development centers and schools on bases across the country to spread the good word. I believe that 2014 is going to be the “game-changer” year for us, and this grant is proving that!