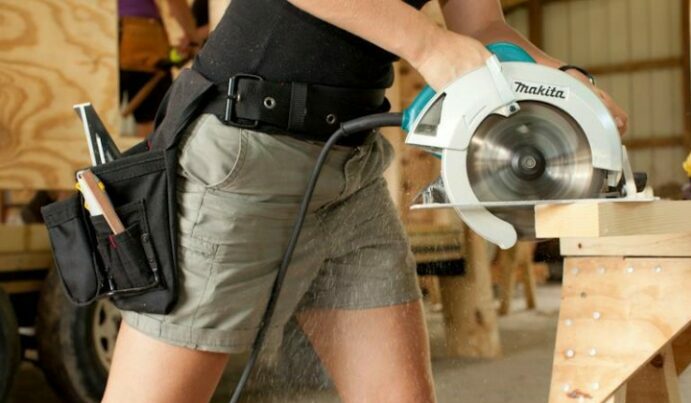 Hammerstone School of Carpentry for Women

We thank Maria for taking the time to answer some follow-up questions. Continue on to learn all about her New York based business. 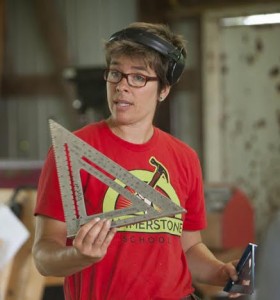 WN: Share with our readers your motivation for starting Hammerstone School.

Maria: When I started construction work 12 years ago, I already had experience in male-dominated fields – I programmed computers in Seattle for several years, and spent a short time in graduate school in the physical sciences. But it wasn’t until I became a builder that I experienced on a daily basis being the only woman in the room (or on the jobsite). Even in tech, I had women colleagues, albeit not many.
My experience working in the trades in Ithaca, NY, a very progressive town, was always welcoming. I never faced overt harassment or discrimination of the kind I hear from other women working or trying to work in the trades. However, I started to get tired of never having female company at work, and more importantly, always being seen as unusual – I was an “exceptional” woman for doing this work. This usually came in the form of the innocent question “how did you get into this line of work?” While innocuous on the face of it, the fact that it was only ever asked of me and not of my male counterparts made it a sexist question.

As I thought about this issue (and there’s plenty of time to think in carpentry), I realized that the only way not to be seen as exceptional was to get more women doing this work. In fact, we have to reach about 30% women in a line of work before it is seen as “normal” work for women. Currently, only 3% of carpenters are women, and that’s a statistic that hasn’t changed over the past 30 years. We have a long way to go.

I started Hammerstone School to improve that percentage, and our hope is to inspire others to do the same thing in their own communities.

WN: How big are the class sizes? What’s your favorite class to teach?

Maria: Our class sizes average about 8 students. Our maximum is 12 with two teachers.

My favorite class to teach is our 2-day Basic Carpentry Skills 101 course. We teach this course at least once a month throughout the year, so it gives me the opportunity to meet a wide array of women. I’m always overwhelmed by the enthusiasm of my students – clearly they are hungry for this program, and there are very few other opportunities like it. I love hearing their diverse stories of why they are interested in learning to build, and what their previous experiences have been. I leave every class with 8-12 new friends and allies in our mission to bring gender equality to the trades.

WN: On the website, we saw that women can request a specialty course. What are some of your favorite projects that have unfolded from that?

Maria: There are two specialty courses that I’m really excited to be working on right now.

The first is working with Rayna, a student from the Lehman Alternative Community School in Ithaca, NY. Rayna approached me because she wants to build a mobile farm stand for her senior project. We decided that putting together a Hammerstone class would be the best way for the farm stand to get built and at the same time teach skills to a group of young women. Rayna is doing all the work to organize the class, from lining up students to writing grant proposals to subsidize the materials costs and tuition for the course. In this way, we can reach a more diverse group of young women for whom the tuition could be prohibitive. The winnings from this grant will go directly into that scholarship fund.

Another project I’m working on for the fall is to teach basic carpentry to a group of Japanese women tourists. I am working with a couple from Ithaca’s EcoVillage who have been organizing Japanese tours around ecological building and co-habitation. They approached Hammerstone about creating a class that would cater to the burgeoning DIY movement in Japan.

WN: We saw that you build ‘Tiny Houses’ in your classes. Did that originally start out as a personal project?

Maria: It did not start as a personal project, but in a way has become one. In fact, the tiny house courses were what got Hammerstone started in the first place.

In early January of 2013, an acquaintance, Liz, approached me at a CSA distribution at the vegetable farm where she was working. “I’d like to build a tiny house” she said, “but I don’t have any carpentry skills. Do you think I can do it? And where should I go to learn how?” Teaching women to build had been an idea percolating in my head for several years at that point, so when she asked these questions, I answered: “YES! I think you can. And don’t go anywhere. We’ll organize a class around building your tiny house.”

This was the birth of Hammerstone School and was the first iteration of our organizing classes around tiny house construction. In that first year, we taught two classes spread over 6 Saturdays each. We could only attract students who lived close enough to travel each day of class. Even with this limited audience, we more than filled both of the classes structured around Liz’s tiny house. It became clear to me that we were filling a niche begging to be filled, so by 2014, Hammerstone School became my full time business.

Liz’s house wasn’t completed in our classes (a week long Hammerstone course can usually finish the framing of a tiny house), but she worked alongside us in the following months to complete the building. In the meantime, we became great friends, and “Tiny” is now parked in my backyard. Liz continues to consult on the business, helping with writing and giving guidance from the perspectives of both a tiny house client and a former student. She also generously allows us to use her house as a model home for prospective tiny house clients.
While I love the idea of tiny houses, and love building them, my own family is too big (6 kids) to practically consider one myself.

WN: What are your long-term goals for Hammerstone?

Maria: I have big visions for Hammerstone!

Right now the business consists of the school and a contracting business. In the school, we are working to develop a wider variety of courses that appeal to both hobbyists and women looking for a career in the trades. Right now, all our courses are short form a-la-carte classes. Students can pick and choose from the 2-day to week-long classes that appeal to them. Our hope is to start longer term programs (semester to year long) that give women an opportunity to learn the process of homebuilding from start to finish, as well as develop programs that work on finer woodcraft.

Within our contracting division, our goal is to continue the education of women in the trades by providing real on the job training through apprenticeship programs. Right now we are building a team of women who are dedicated to teaching and who can manage jobs and train apprentices. This is a long term process, so we won’t be accepting apprentices for a couple of years. In the meantime, we will be building the reputation of Hammerstone Construction as high quality craft builders focused on energy efficient houses and using as many natural materials as possible.

Other goals for Hammerstone include writing children’s books that celebrate women in the trades, developing our line of carpentry outfits for American Girl dolls, and building a carpentry-based maker space where locals (especially kids) have access to tools and resources to build with wood.

Thanks for reading! Remember that we award a grant every month – if interested, please apply today.